In late 2018, my brothers and I decided it was time to travel to South East Asia.  None of us had been there before, but the draw of the region is unquestionable.  The prices were great, the food is amazing and more than enough to see and do to keep you busy for as long as you want to go.

We took three weeks and toured from the beaches of Cambodia and Angkor Wat, into Da Nang, Vietnam and Hoi Ann, up the coast to Hanoi and Ha Long Bay, over to Luang Prabang in Laos, up the Mekong River to Thailand and finished with two days in Tokyo.

While the trip had many highlights and so many amazing things to see and do, one of my favorite places was an 'OTG' spot near Hue, Vietnam.  It's not a destination that the normal tourist would seek out, but I have an affinity for abandoned places and this one did not disappoint.  If the idea that someone spent millions to build their vision and it now sits empty, overgrowing and graffiti-filled, put this spot on your list.

The place is called Ho Thuy Tien and it opened in 2004.  From the information I can find, it cost about 3 million US dollars to build and closed not long afterward.  It has been sitting in a state of disrepair ever since.  It is located a few miles outside the city of Hue, Vietnam and I should just say, it's not one of those things you'll find on tourist maps. Actually, it is 'closed' to the public.

We arrived by hired car, once the driver knew what we were talking about. Upon reaching the gate, we were told by the guard there that we were not allowed in.  As we were about to leave, I thought it couldn't hurt to offer a few dollars, not knowing what he would say.  The blogs I've read said that is the way to do it and to our surprise, he was more than happy to let us in. The funniest part of the whole thing is, not only did he let us in, but he took us on his scooter all the way back to the dragon and couldn't have been nicer, even though we didn't share the same language.

This place has a killer, eerie, post-apocalyptic feel to it. Like someone just left one day and never came back, which is, I think, exactly what happened.  The main feature is obviously this huge dragon in the middle of the lake. You can walk through the body of the dragon up into its mouth for an amazing view across the lake.

After spending a while there, we journeyed out to check out the rest of the park.  If you walk around the backside, you'll find older, what looked like housing, or some other small attraction.  The forest around it had an eerie feeling for sure, but the cloudy gray skies might have helped that a bit!

Farther over on the other side, you find the water slides, and lazy river all overgrown, rusted out and covered in graffiti.  On the far side, there is also an amphitheater that obviously was built for some large shows, as it probably sat a few hundred people.

Overall, amazing, loved it.  Again, an affinity for abandoned places took us there, but if you have a spirit of adventure and a little luck, you'll get to see a very cool, completely unique place! 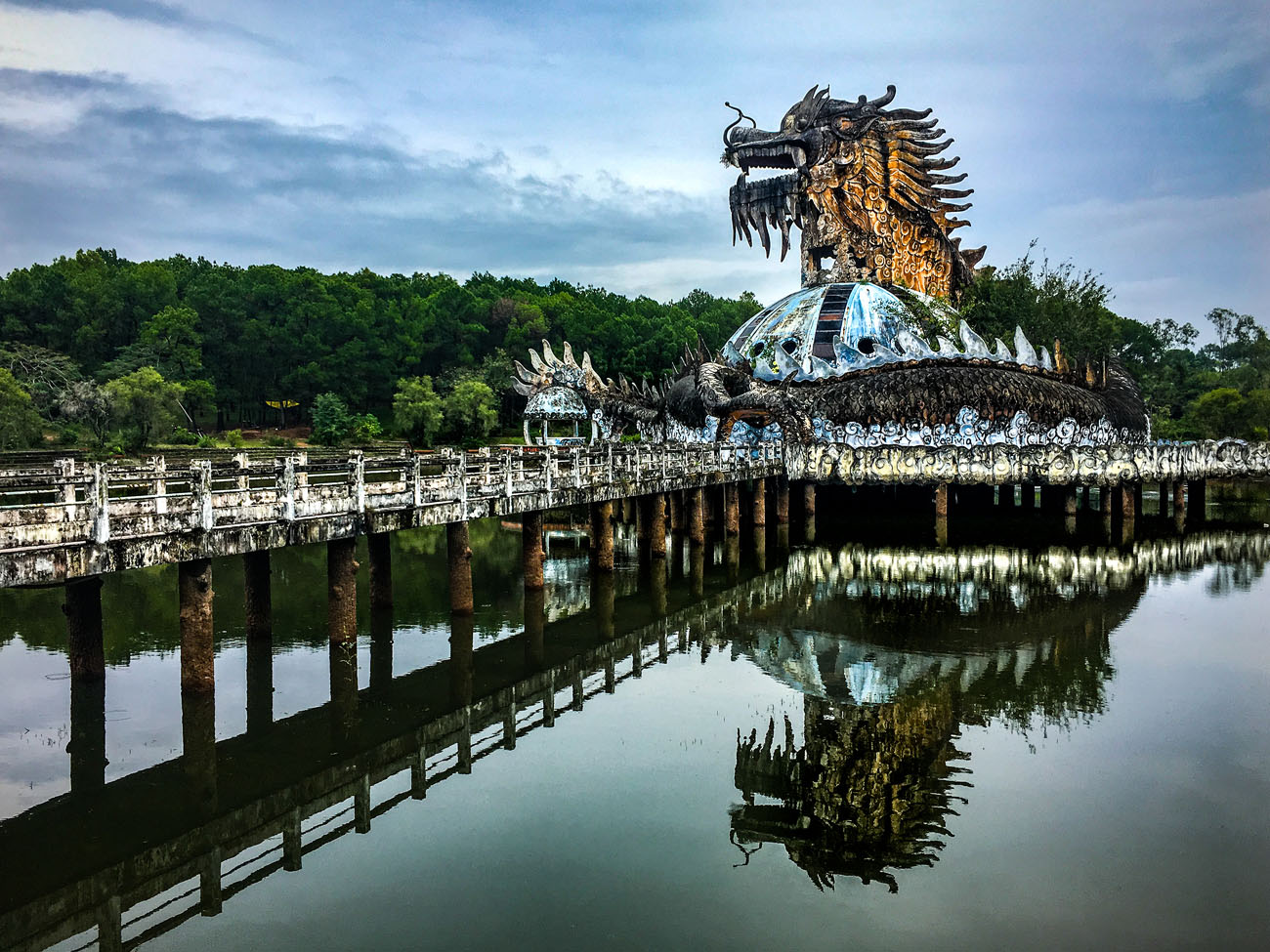 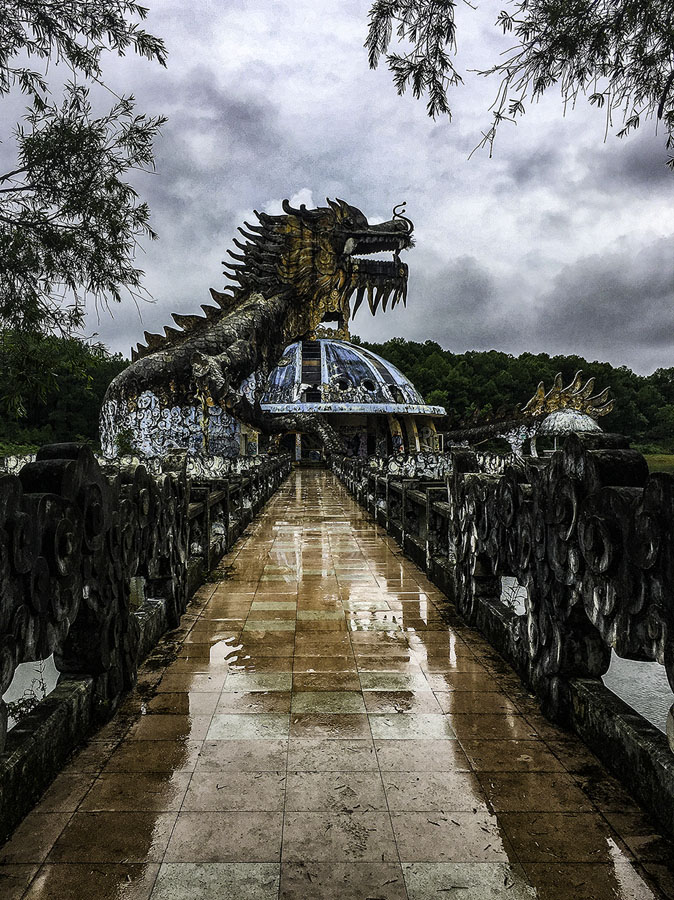 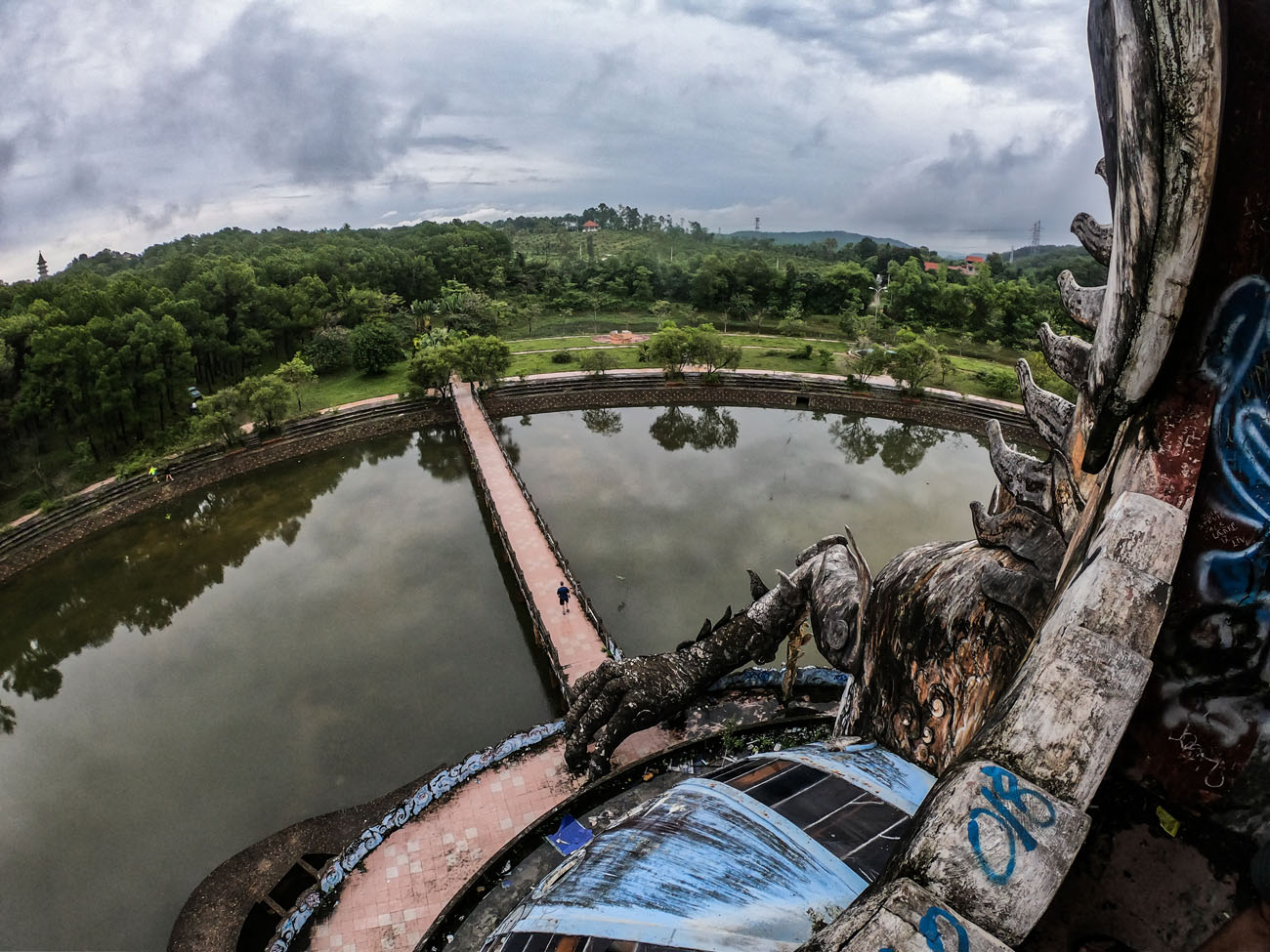 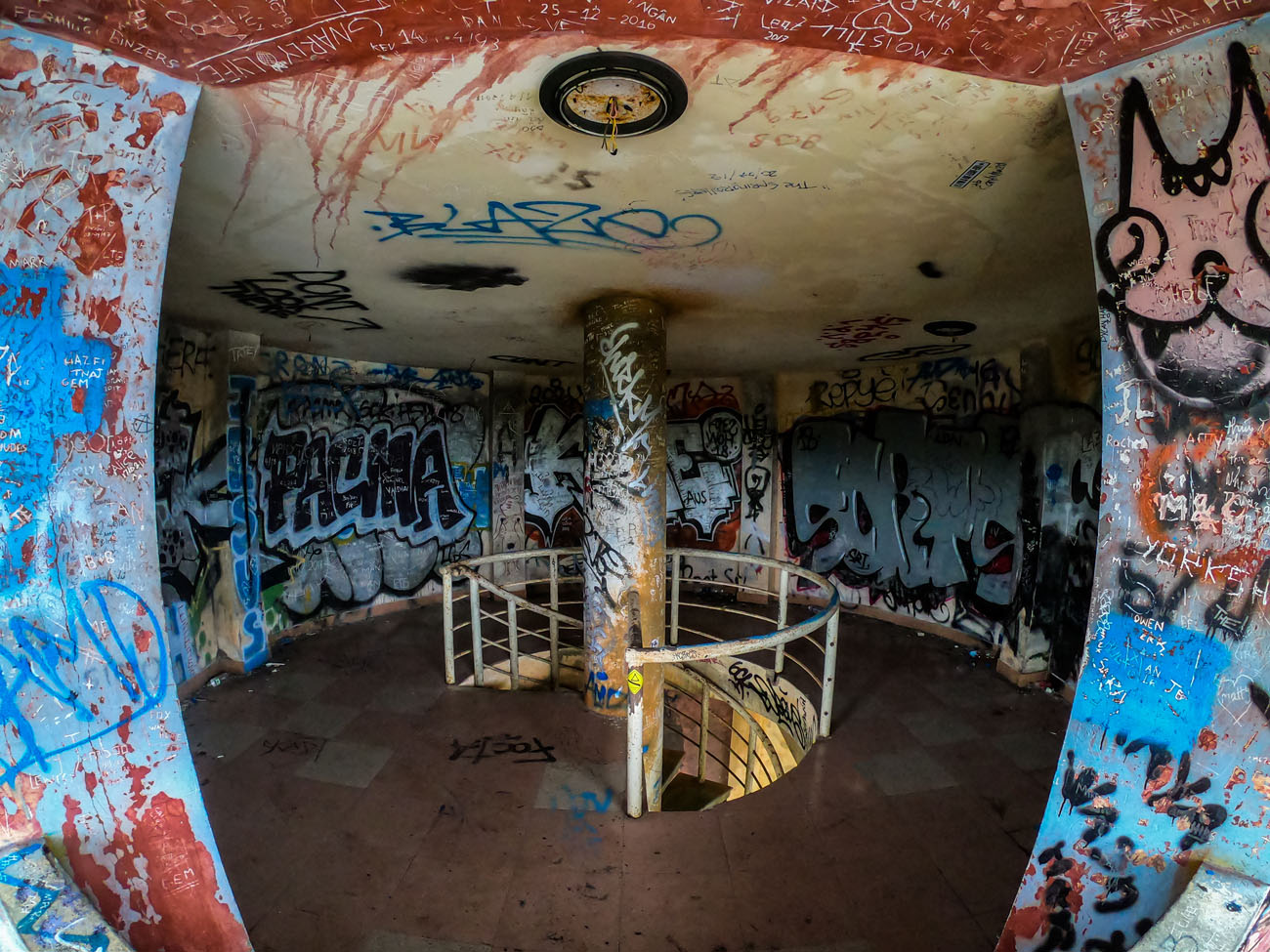 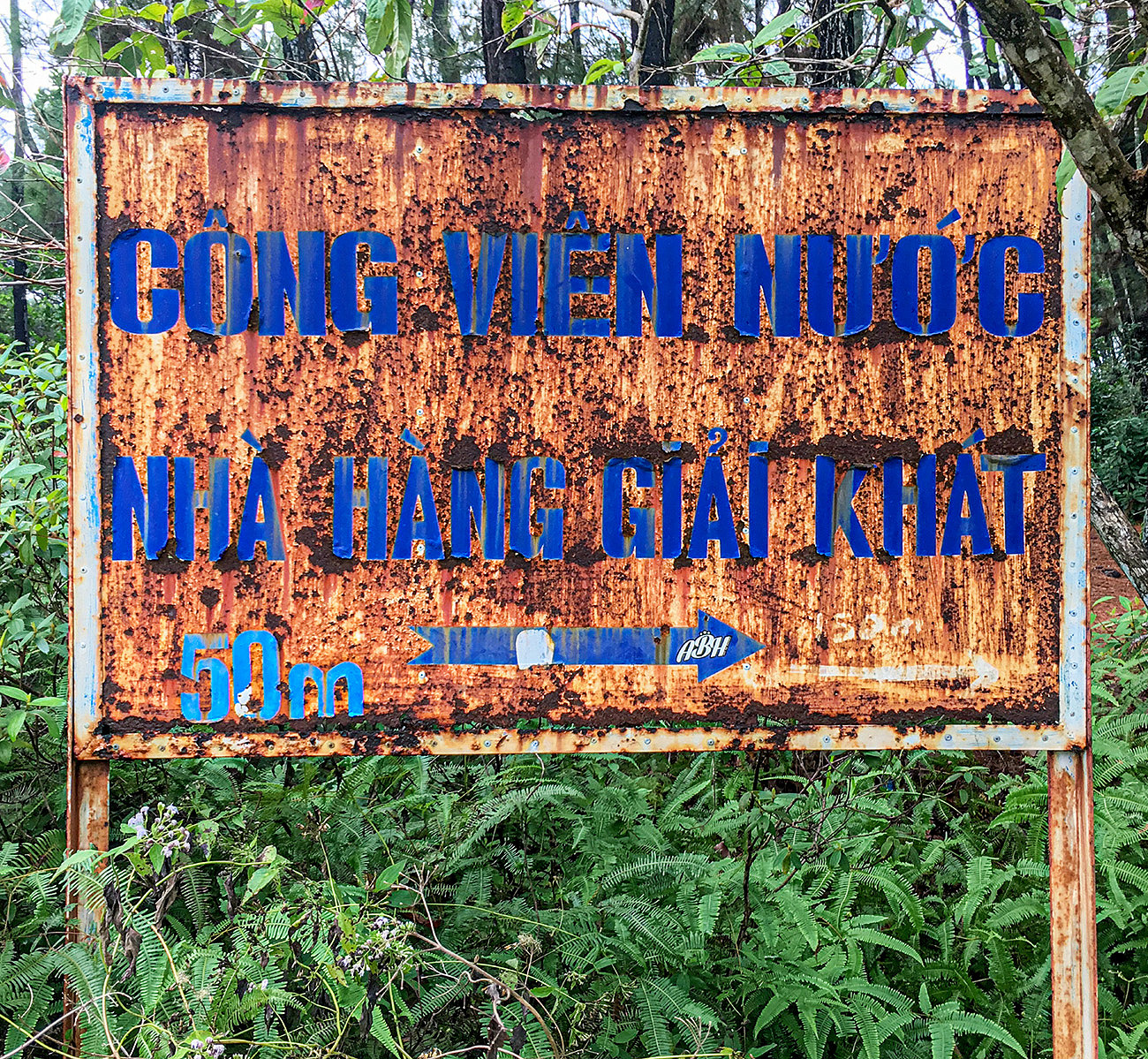 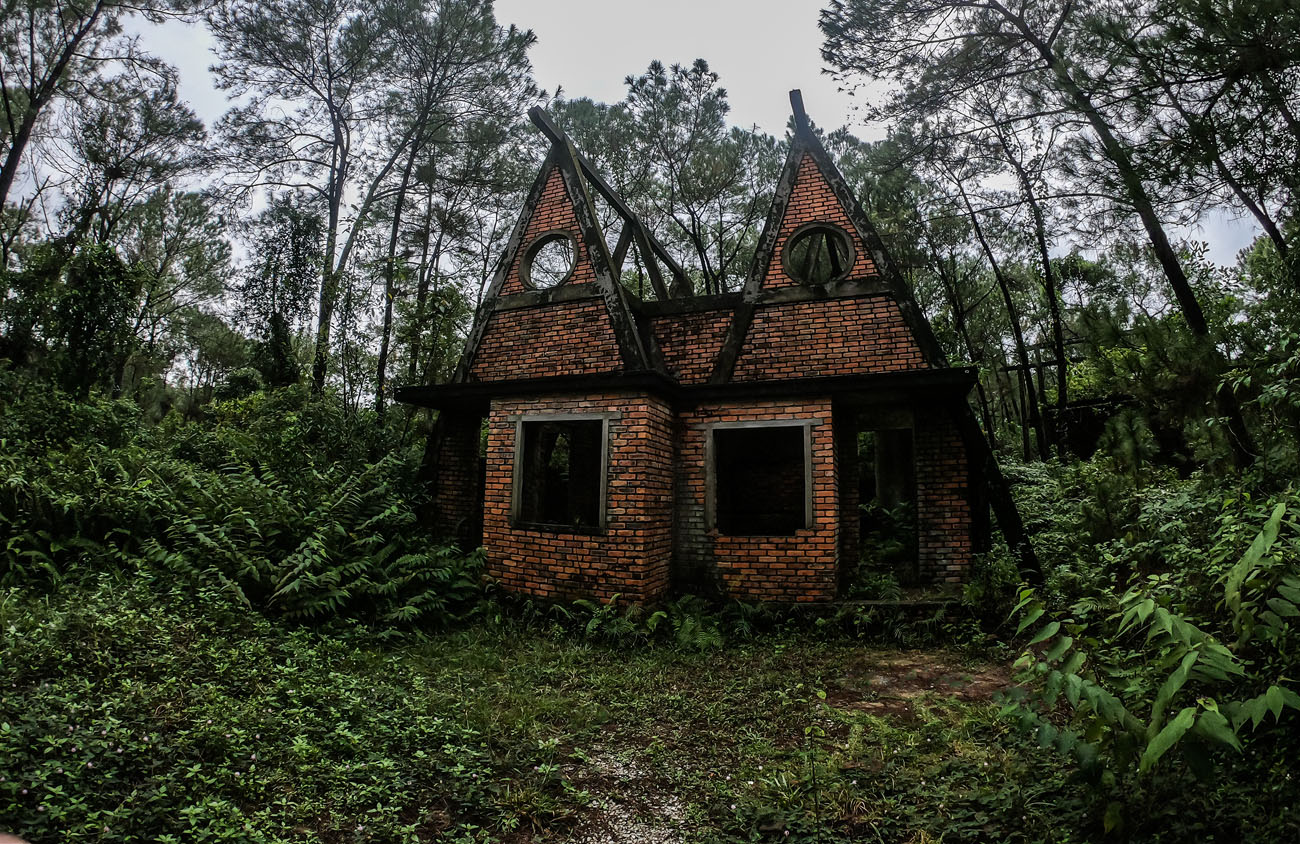 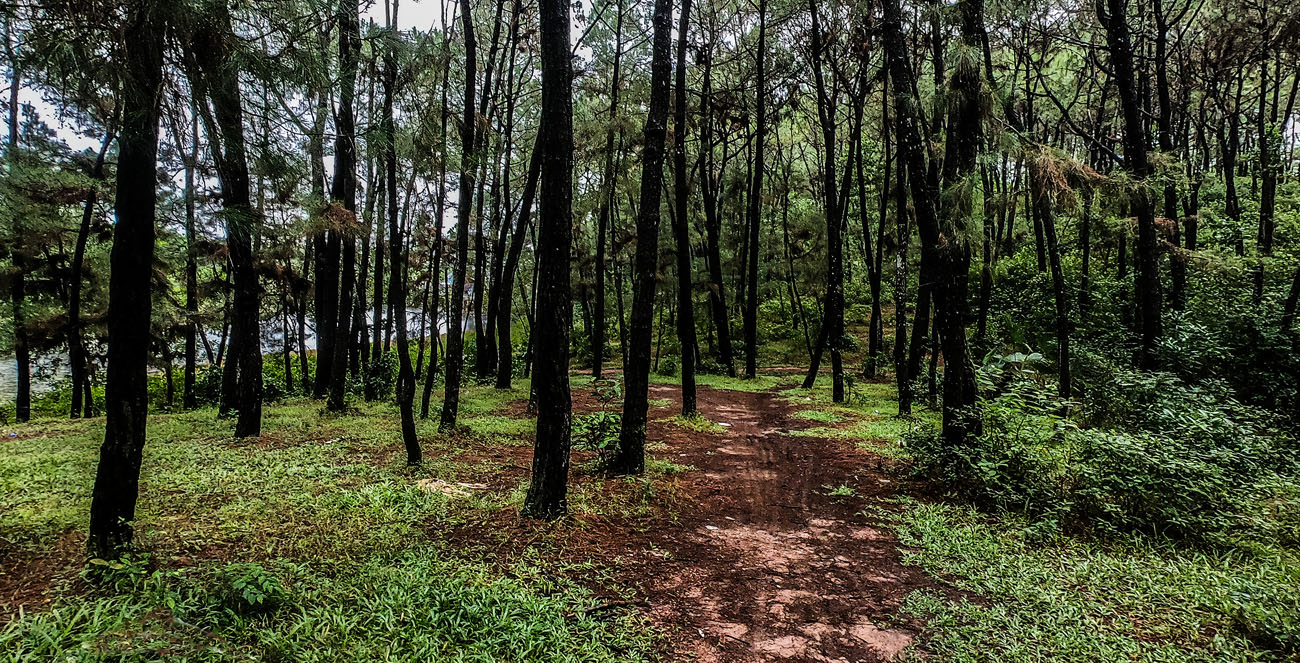 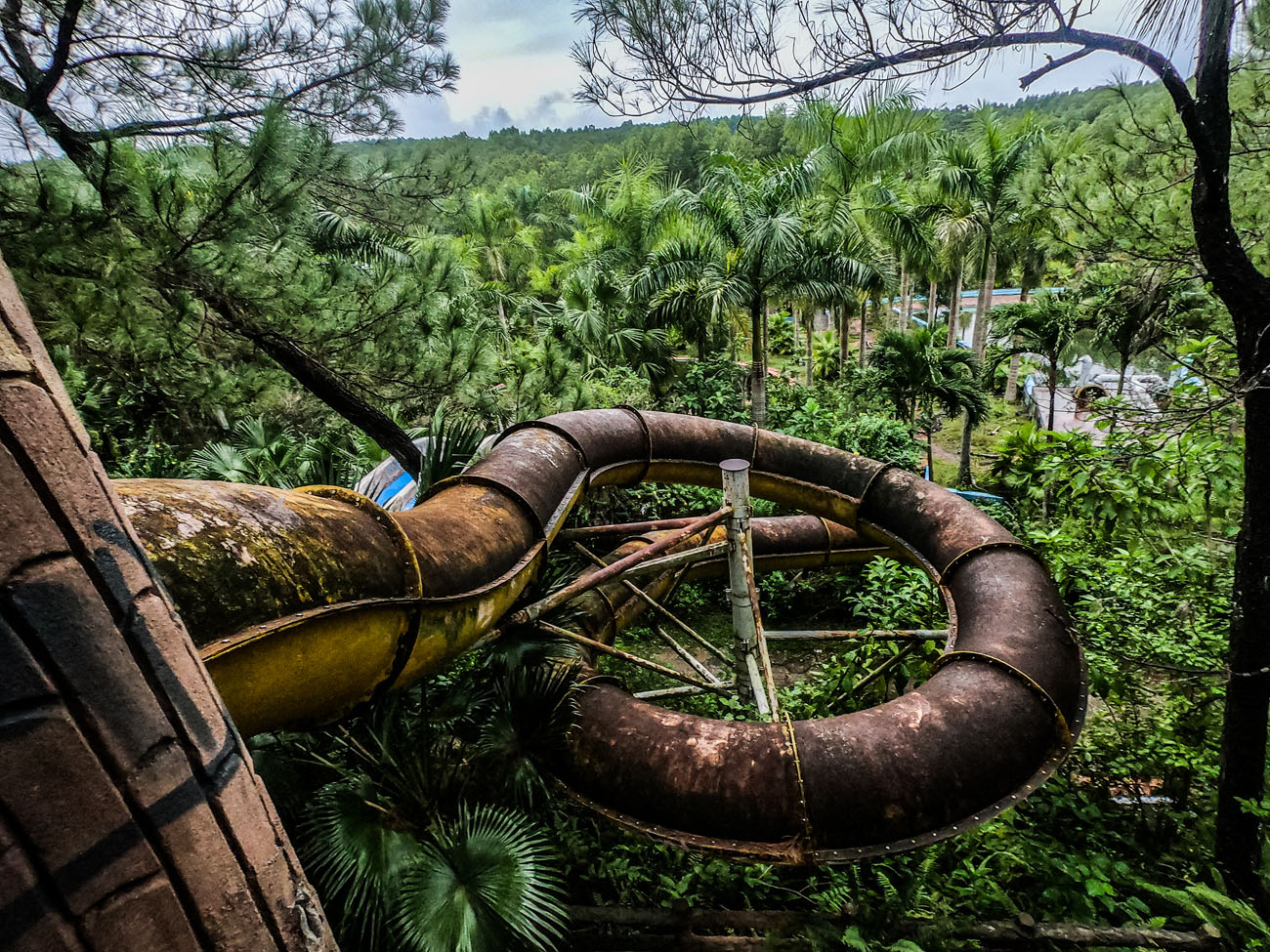 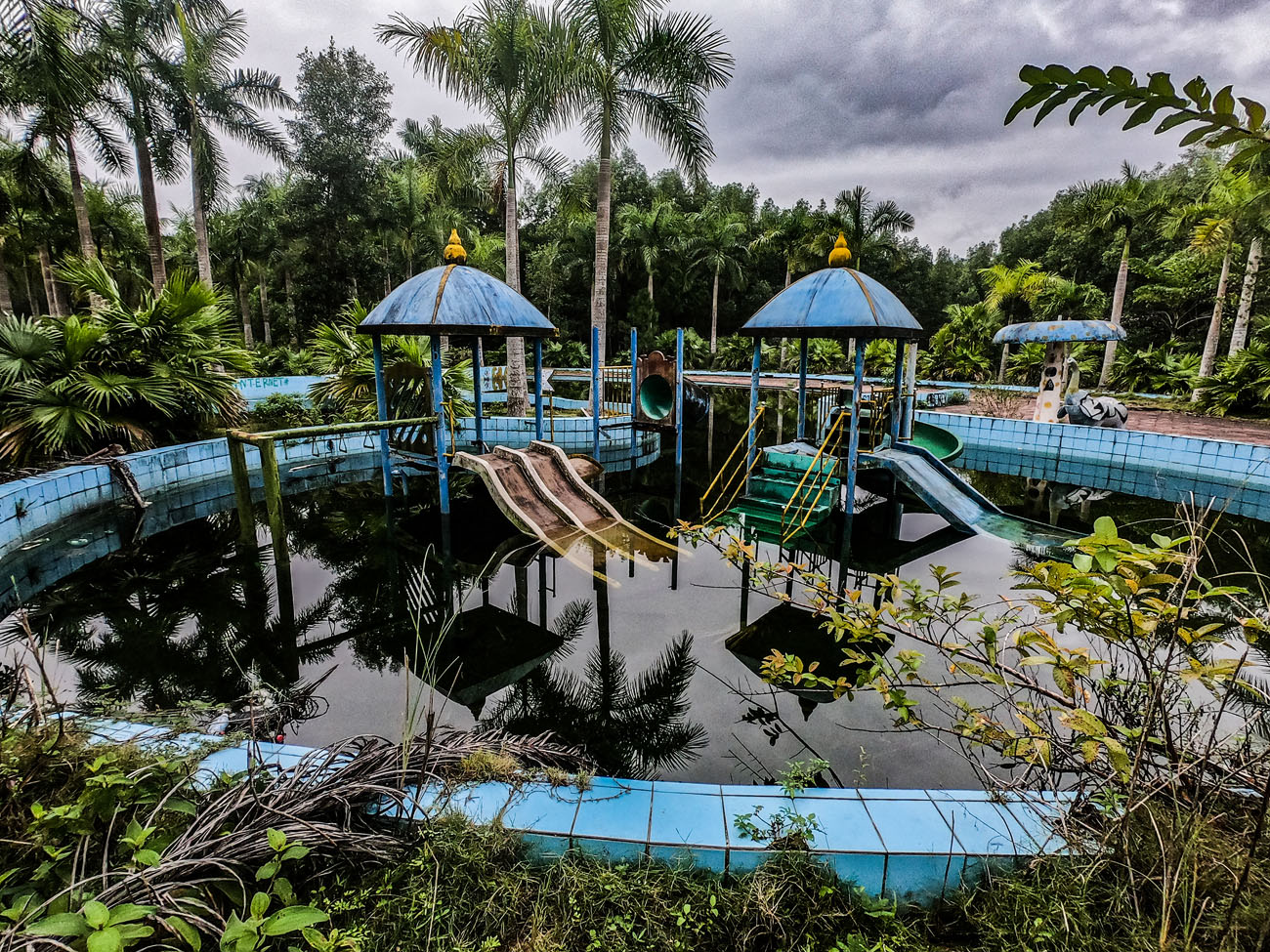 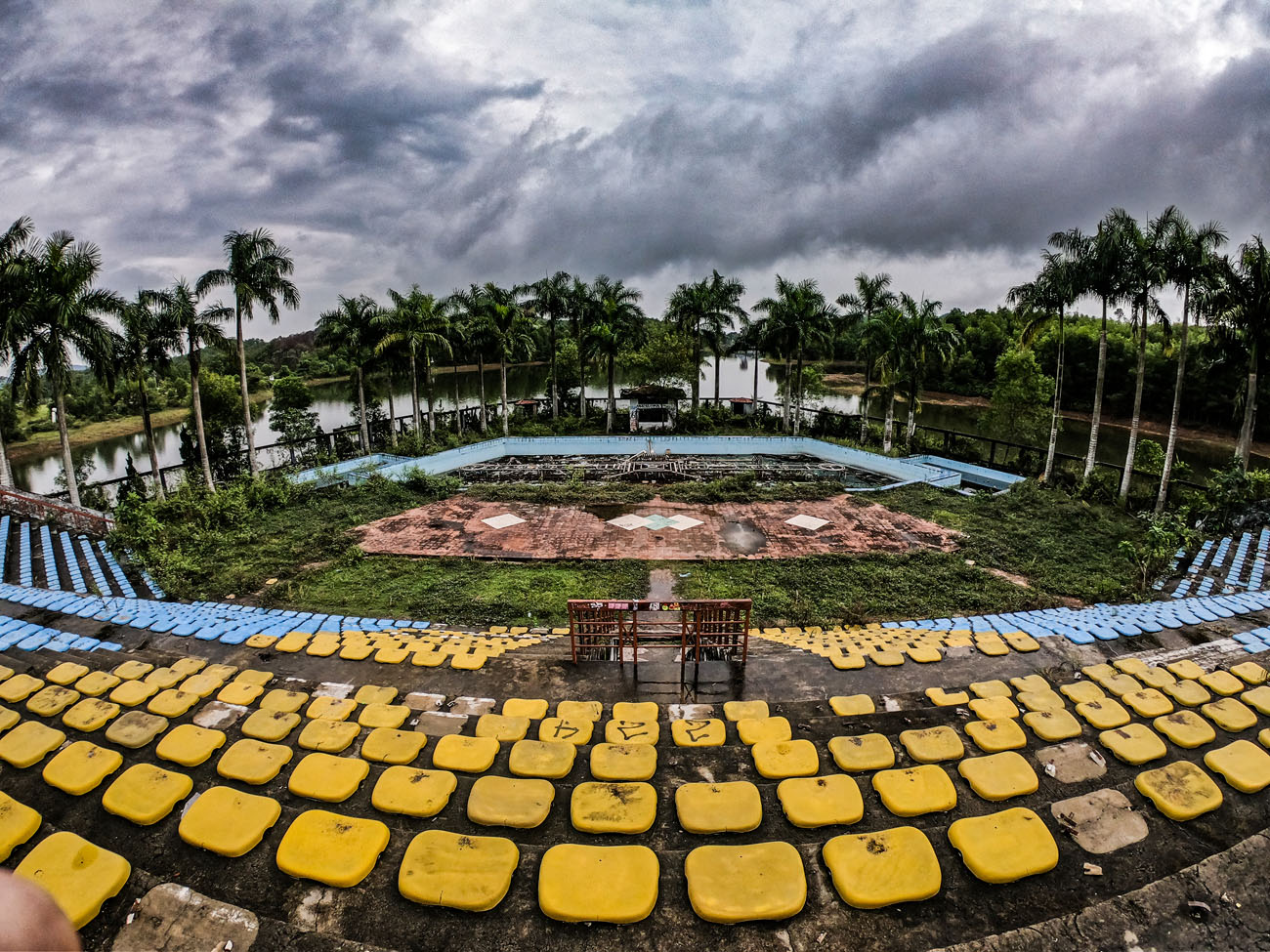 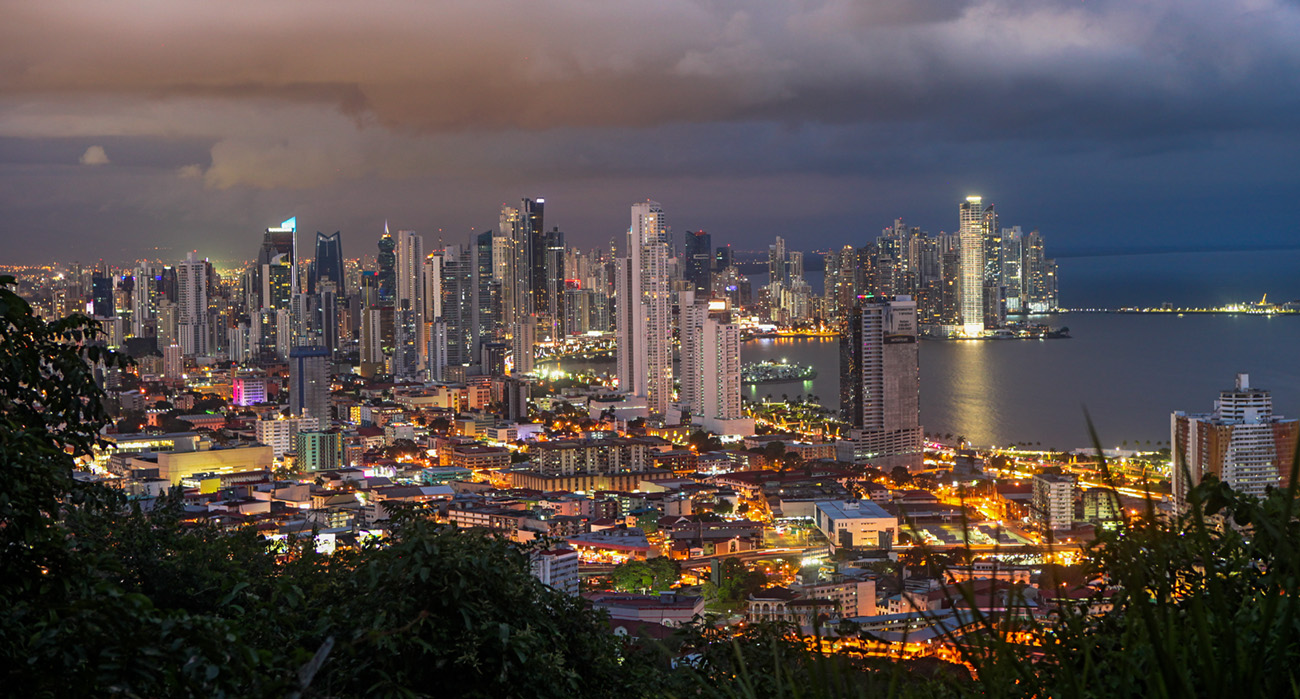